USA, THE LOWEST RATE OF PRODUCTIVITY SINCE WWII 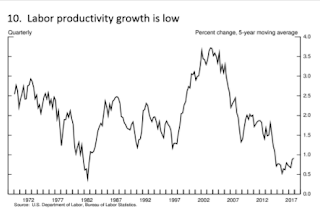 The USA counter-offensive managed to advance the world and established a national truce between the two wings of imperialism (Democrats and Republicans, with all their contradictions and fractions, from Bernie Sanders to the Tea Party).

At the heart of the monster, there was a relative and momentary process of economic stabilisation, supported by the increased oppression of workers and immigrants, widespread precariousness of work and increased misery. Thus, embellishing the official indices, Jerome Powell, the president of the Fed (the central bank that most influences the planetary economy), announced that US unemployment fell from 10% in 2009 to 4.1% in 2018, but economic growth barely reaches 2%. Between 2000-2007 growth was 3% per year, which, for the US, is well above the current rate of expansion. Powell acknowledges that: 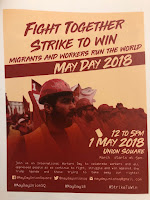 2018 sees the deepening of the threat of WWIII primarily from the USA. The main trends of the world class struggle in 2018 point out that the empire struck back and regained a part of the planet lost to the Eurasian bloc after the economic crisis of 2008. The US has declared a trade war against China and imposed new sanctions on that country, Russia, and Iran. In recent years, through various mechanisms of hybrid warfare, coups, media bombings, fraudulent elections, the US regained neo-colonialism in Latin America (Brazil, Argentina, Peru, Ecuador, Chile, Paraguay, Honduras). Stabilizing relations at its core with Europe, between the United States, England and France, imperialism once again has the main target of the dispute in the Middle East, refusing to accept defeat to the Eurasian bloc in Syria (Russia, Syria, Iran, Hezbollah) and they are set to break the agreements signed by the Obama administration. Allied with Israel, it resumes hostilities against Iran, threatening to nullify the agreements signed in 2015; it supplies heavy weapons (including missiles) to Ukraine, breaking what was established in the 2015 Minsk peace agreement.

In 1991, my book, the Big Bang Never Happened(Vintage), presented evidence that the Big Bang theory was contradicted by observations and that another approach, plasma cosmology, which hypothesized a universe without beginning or end, far better explained what we know of the cosmos. The book set off a considerable debate. Since then, observations have only further confirmed these conclusions, although the Big Bang remains by far the most widely accepted theory of cosmology.

HAWKING IS WRONG ONT THE THE BIG BANG

The Poverty of Philosophy; why Stephen Hawking is wrong on the Big Bang

The death of Stephen Hawking on 14 March involved this author in four separate Facebook debates. Many comments were simply ignorant attacks on me for having the gall to attack the conclusions of the great scientist, some sneering bigots who were open renegades from Trotskyism, former comrades who wanted to ingratiate themselves with the capitalist establishment vis Labour reformism to enhance future career prospects by attacking revolutionary Trotskyism.

In defense of Nicaragua, against the USA and its coup agents

A new focus of tension emerges from the current cold war, a new operation “regime change” is underway, the US now support a campaign to overthrow the Nicaraguan government. Since April 18, armed right-wing paramilitary groups have carried out a wave of violent attacks against public institutions, leftist demonstrators and police, to create chaos and promote civil war in the country. 10 people were killed and more than 80 were injured, including at least 30 policemen. Most of the deaths resulted from the lethal use of firearms by right-wing provocateurs.

THE NICARÁGUA CANAL AND THE IMPERIALIST COUNTER-ATTACK

For the US, the suspension of construction of the Grand Canal of Nicaragua was a strategic task of national security. The US is in an open war against China and the Canal would be a powerful tool for commercial navigation, controlled by the eastern rival, in the US backyard. There was no way to stop directly to China to carry out the work without passing the trade war directly to the military war, and then to the third world war.

For a United Front against the Coup! Now!

For a united front of the entire Left against the coup, on the streets, in the elections, in the places of work, study and housing! Now!

We hereby translate and reprint a statement by our comrades from the Frente Comunista dos Trabalhdores (Brazil) regarding the escalating threats for a new coup by the counter-revolution. 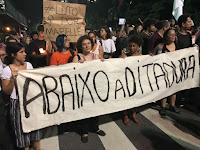 A day after the carnival, the Army, the Globo TV channel and the Temer government escalated military intervention in the country's second most important state, as an prelude for the imposition of a new regime in the country. One month after the start of the intervention, a popular parliamentarian was executed, in a public street in the center of the city, with four shots in the face. Nobody should be fooled by the stories about a “robbery”. This was a message from the coup leaders to the Left. Their goal is to terrorize those who take a stand against the military intervention, to which the city council is also opposed. The following week and in broad daylight, armed fascist militias threatened Lula, the top leader of the masses and favorite candidate of the population, who is about to be arrested by the regime.
Read more »
Posted by Socialist Workers League at 8:40 AM

The far-right provocation will not be tolerated!


This statement was originally published in Greek on 26 January 2018. It is not so much an in-depth analysis of the Macedonian issue; its emphasis is laid on the wave of resurgent –and utterly reactionary– Greek chauvinism.

Against the chauvinist rallies!

The enemy is within “our own” country!

We take the streets on both Saturday and Sunday in internationalist, anti-fascist rallies!

Since Sunday 21/1, the country is living in the rhythm that has been imposed by the far-right sewer and the deep state, after the nationalist rally in Thessaloniki.

The official government is also dancing to the tunes of the far-right -as it usually does every time the situation gets tense- carrying out the orders of the EU and the liberals of the reactionary movement “We Stay in Europe”. In order to comply with those who are truly in power in this country, the police turn a blind eye to or even support the fascist provocations, as was the case three times in Thessaloniki when they attacked together the Free Social Space “School”, unsuccessfully, and were repelled by the self-defense; a little later they torched the anarchist squat Libertatia, with the police preventing even the fire brigade from approaching. The joint action of fascists and SWAT police (MAT) continued the following day, when they attacked a 2,500-strong rally in solidarity with the Libertatia squat, beating and tear-gassing dozens of demonstrators and arresting 5 of them on serious –as well as baseless– charges.
Read more »
Posted by Socialist Workers League at 11:02 AM

Louis de Saint-Just, French Revolutionary, January 1793:
“Those who make revolution half way only dig their own graves”.

Following the ouster of Zuma in South Africa on 15th February and of Mugabe in Zimbabwe on 21st November imperialist-sponsored coups Venezuela seems to be next in line for the treatment. Anyone who thinks that the shoe-in of Ramaphosa, the Butcher of Marikana, will mean the end of their long nightmare is a politically naive idiot. Ramaphosa is about to begin imposing an even worse nightmare now, which was the purpose of ousting Zuma, and the same applied to Mugabe. What bastards this pair were, the Washington Post and the New York Times and the British Times and Telegraph told us, this fire we have prepared for you is much better than that frying pan.

Read more »
Posted by Socialist Workers League at 10:21 AM